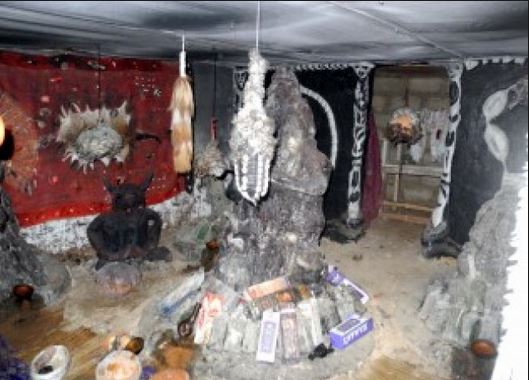 It was a horrific sight when the decomposing remains of 21 year old Morenikeji Owolabi were discovered in a shrine at the rustic Eposo village, Ishara, in Remo North Local Government Council of Ogun state.
Morenikeji, a female student of Science Laboratory Technology department at the Gateway Polytechnic, Saapade, hails from Ekiti state but was said to be missing some days ago.
But on Tuesday, her dismembered and decomposing remains were found littered at a Shrine by policemen.
The girl was allegedly lured to the shrine by a herbalist, Femi Awise, where she was found dead.
Awise, a native of Isara and prime suspect, is said to be on the run but five persons suspected to be working for him, including a cyclist who conveyed the girl to the shrine and an apprentice of Awise, have been arrested.
The suspects are Adeyemi Ademolu (the cyclist), Omolaso Taiwo (Awise’s apprentice), Lateef Ali, Akinyemi Dare, and Sokoya Wasiu.
According to Ademolu, the victim spoke with Awise twice seeking information about the direction while being conveyed to the shrine.
The state Commissioner of Police, Mr. Valentine Ntomchukwu, led some reporters to the shrine tucked inside a forest.
He said investigation had started to ascertain how the victim was killed.
Although the decaying legs of the girl exhumed from a shallow grave few meters away from the shrine were discovered but The Nation gathered that investigation continues to trace where her head, breasts and private part were kept.
The cubicle – size shrine made of corrugated iron sheets, was strewn with scary fetish objects, bottles of palm oil knives, plates and a pot filled with boiled human flesh and which had also began to emit foul odour.
Ntomchukwu said, “What we want to tell the public is that they should monitor the movement of their wards and children, especially when they are left to be in school and other public institutions.
“They should always keep watch over their children, call them regularly and where they don’t see them, they should quickly report to the police.
“If we had received this report on time, we would have been able to trace this lady. By the time we got the report, we now started scouting for information, only to arrest the okada man (motorcyclist) that brought her to the Shrine.
“It was from that okada man that we were able to know that she was taken to this area and by discreet investigation, we were able to discover this shrine.
“We don’t know how long this shrine has been in existence but we assure you that this particular nefarious activity would be put to an end.”
The Local Government chairman, Femi Soyemi, who was shocked and appalled by the horrible discovery said he never believe such savagery could exist in his domain.
Soyemi said, “I was shocked because I never expected this kind of horrible and brutal thing exists here.”
Also, a 40-year-old kidnapper, Emeka Obi, was arrested by the Police in connection with the kidnapping a 97-year-old nonagenarian, Mr. Iposiola Samaiye.
Ntomchukwu told reporters that Obi and members of his gang, kidnapped Pa Samaiye from his home in Ijebu-Isire last Thursday, and demanded ransom for his release but the Police trailed them to the forest where the victim was held captive.
According to him, Pa Samaiye is currently receiving treatment at a private hospital in Ijebu Ode.