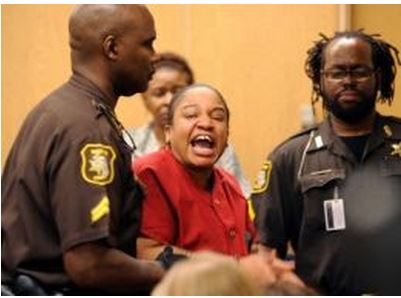 A Detroit mother accused of killing two of her children and storing their bodies in a freezer yelled during separate court outbursts Thursday that she killed them.

Mitchelle Blair was temporarily removed during the custody trial to settle her parental rights to her surviving 8-year-old son and 17-year-old daughter.

She was arrested March 24 after court deputies carrying out an eviction at her apartment found the bodies of Stoni Blair, 13, and Stephen Berry, 9, in a deep freezer. Police believe they died months apart in 2012 and 2013.

Blair is charged with murder, torture and child abuse. She is to undergo a mental competency exam before a June 19 probable cause hearing in the murder cases.

As a videotape was played Thursday in court showing Blair’s surviving son telling a social worker that he saw his brother get killed by their mother, Blair yelled that he “didn’t see me kill Stephen, ’cause it was unintentional.”

On another occasion Blair yelled: “Everybody wants to know. Yes, I did kill her,” referencing Stoni.

Blair’s surviving son also said in the interview with the social worker that he was whipped with a cord and that his 17-year-old sister was hit with a hammer. Both surviving siblings have been placed in a relative’s care.

The state also wants to end the parental rights of their fathers.

The state says the fathers rarely see the kids and owe thousands of dollars in child support.