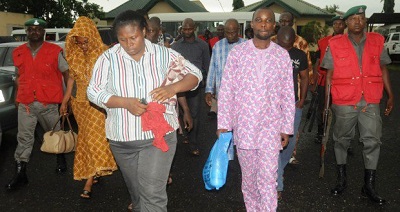 The Federal High Court in Ibadan on Wednesday ordered the remand of eight bank officials over alleged currency scam.

The Economic and Financial Crimes Commission had arraigned three Central Bank of Nigeria (CBN) staff and five employees of First Bank Plc over the alleged scam.

The commission arraigned the bank officials on a 28-count charge bordering on forgery, misrepresentation and self-enrichment before Justice A.O. Faji.

The EFCC, in the charge, said the CBN staff conspired with the First Bank employees to recycle N10 million mutilated currency notes meant to be destroyed.

Other charges preferred against the accused included amassing wealth beyond their statutory income and causing economic adversity to the Federal Republic of Nigeria.

Justice Faji ordered that the accused be remanded at the Agodi Prison in Ibadan while adjourning the matter till June 8 to hear the bail applications.

Earlier, Olayinka Bolanle, the defence counsel to the first accused person, Mr. Babalola, had made an oral bail application on behalf of his client.

The judge, however, opposed the oral application and said he preferred written application for bail.

Mr. Faji said that in view of the gravity of the offence, oral bail application would not be accepted.

He ruled that in view of the volume of evidence before him, it would be impossible for him to entertain oral bail applications from six different defence counsel.

The judge, therefore, ordered the defence counsel to file their bail applications before the close of court business for the day and serve the prosecutor who in turn should respond by June 5.

Thereafter, he ordered the remand of the accused persons in prison custody and adjourned till June 8 for the hearing of bail applications.