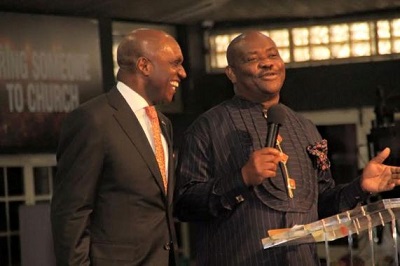 Governor Nyesom Wike of Rivers State on Sunday vowed that only tested technocrats and trusted politicians will make his cabinet with the strategic aim of developing the state.

Speaking during a post inauguration thanksgiving service at the Salvation Ministry in Port Harcourt, yesterday, Wike said he would carry everyone along in the move to revive the state.

Wike gave the assurance in response to a request by the General Overseer of the Salvation Ministry, Pastor David Ibiyomie, who prayed that the incoming government be made up of technocrats.

“God will not allow us to fail. We will bring men and women with capacity to work for the state. “I am from Rivers State and I believe in Rivers State. The deputy governor and I will work in the overall interest of the state”.

He said a government built on God can never fail. He also advised the governor to run a people oriented government to revive the state.

The clergy, however, warned the governor against trying to please everyone as that would be a recipe for failure.