A suspected 15-year-old teenage armed robber, Kosi Ebosie, who was arrested in Umuchu town in Aguata local government area of Anambra state, has confessed to the crime, saying he inherited the gem from his father who was also a notorious criminal in the area. 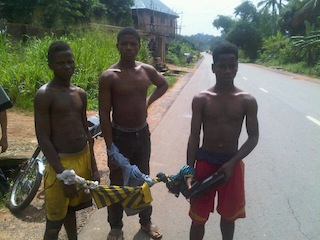 Ebosie told reporters that his family members were not surprised of his taken to crime as they used to tell  him that he was the carbon-copy of his father adding his dad was a known criminal.

The suspect was apprehended along with his two gang member, Chima David, 17 and Onyedika Ikesinachi, 16, on Tuesday, June 23, 2015.

The teen robbers were arrested after they robbed St. Andres Anglican Church, at Umuchu. They reportedly robbed the church with arms during the early morning mass.

According to PM News, the trio ran out of luck vigilantes and youths, who  have been keeping vigil in the community following an incident where markets in the community was raided, caught the teen robbers.

Ebosie said he dropped out of school to take to robbery which he described as being a lucrative business. He disclosed that he do not see himself leaving robbing because it as becomes part of his life.

He further stated that he discovered at a very tender age that the urge for stealing is strong in him adding that his father had to sent him out of the house because of his insatiable quest for stealing, which eventually led him to joining the gang.

One of Ebosie accomplices, David said that his entry into robbing started when he was stealing people’s fowls in the community where he lived. Confessing that he normally eat four fowls per  week until the trap he used in catching the fowls mistakenly caught a dog.

Following the incident that exposed him, he had no choice but to run away from home adding that he found a safe haven in the gang.

The suspects were, however, said to be cooling their feet at Umuch police station. The divisional police officer of the station was not available to comment on the incident.

However, a police source decried the growing number of teenagers in the state who have taken to crime.