Mr. Alex Egbon had planned an elaborate naming ceremony for his fourth child but the birth of a new baby which is supposed to be a joyous occasion for a family has however brought pain and anguish to the Egbons.

The Egbons’ joy was cut short as the mother of the baby Christian was unable to attend her daughter’s naming ceremony.

Christian 32 lost her life shortly after she gave birth to her fourth child. While her death is still fresh in the community, strangely Mrs. Egbon a teacher with Sky-Light school is the third in the last one month to die during child birth at Elepete a boundary community between Lagos and Ogun States causing residents to worry about the incessant deaths from child birth in their community. 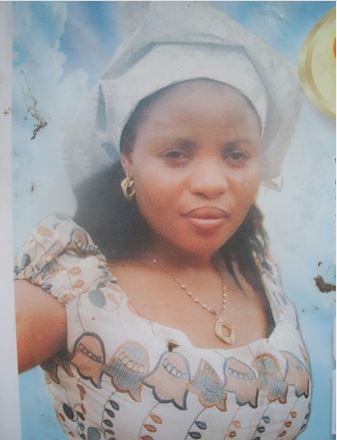 Since Mrs Egbon’s death at the Ikorodu General Hospital on June 4th, residents have resorted to fasting and prayer, while others have taken to ritual sacrifices in a bid to appease the gods of the community to stop further death of pregnant women and their children as they fear that the community is under a curse and other pregnant women and children may fall victims to the mysterious “killer”.

While some residents are attributing the mysterious death of the women to the electrocution of a private electrician simply identified as Lucky a father of five who died while fixing a faulty electrical pole in the community, others are however placing the blame on bad roads and the unavailability of hospitals in the community.

Residents said probably, Lucky’s sudden death while working for the community might be responsible for the mysterious deaths and they have offered sacrifices to appease his spirit to no avail.

Our correspondent visited the community on Saturday and spoke with two of the husbands of the women that lost their lives during childbirth.

“That fateful day, my wife said she was having pains in her stomach. I knew her delivery date was near so I rushed her to the Ikorodu General hospital. She eventually had the baby and she told me to bring pepper soup for her. I rushed and brought the pepper soup and she ate. Shortly after, she said she was dizzy. I called the doctor and he told me that my wife was losing too much blood. The doctor told me they had to remove my wife’s womb to stop the bleeding. I consented to them and they wheeled my wife to the theatre. The doctors told me they had to transfuse blood into her. He later came out of the theatre to inform me that the blood they were transfusing through my wife’s vein was gushing out from her vagina. He gave me a list of drugs to buy. I hurried to get the drugs. I was far at Mile 12 area but I had this strange chilly feeling. At that moment, I received a call from one of my relatives to come back to the hospital. I rushed back and at that point I saw the nurses wheeling a body on a stretcher. My relative hugged me and told me my wife had died. I broke down in tears. This is one week after her demise. We are having a low key naming ceremony. My wife was a good woman and we miss her”.

Saturday Mirror learnt that he lost his wife and their new baby shortly after delivery. A fellow trader where Shakirat sold building materials said Shakirat bled to death.

“We are shocked that she died. That day, May 15th, she was the one that went to the hospital herself after she felt contraction. She told me she was going to her clinic at Mowe a very far distance from here.

Later we heard that she gave birth to a baby girl. We were expecting her to return home with the baby but we got sad news that she started bleeding. She died shortly after and her baby also gave up the ghost a few minutes after she died”.

Saturday Mirror spoke with the Chairman of the Elepete Community Development Association Pastor Olatoye Okesunya and he narrated how the other women died.

“Early in May, I got a report that one Mrs. Wasiu Sunny bled to death after she gave birth to a baby girl. There after I received the sad news that a woman with fibriod also died. We have begun a series of prayer and fasting to stop these mysterious deaths. We brought some pastors together and we have been praying. Just as we are engaging in spiritual warfare, we can also attribute the deaths to the unavailability of a good nearby hospital. I want to use this medium to appeal to the government to build a good hospital in our community. We have the land. There is no good hospital around here. The one at Igbo-lomu community which is close to us is not a standard clinic. There are no doctors and the few nurses are not always around. Our women and the sick had to travel long distance to attend the Ikorodu General Hospital. The roads in our community leading to any decent hospital are in bad shape and this discourages women from attending regular ante-natal clinic. We are mourning but we want government’s intervention in the area of good roads and a standard hospital so that these ugly incidences will not befall us again”.

Mr. Jide Omoyale the Secretary of the CDA said he has restorted to prayers for his wife to give birth safely.

“My wife is pregnant and we are praying and fasting. I believe nothing will happen to her. I don’t want to live in fear of what is happening. I appeal to government to give us good hospital and motorable roads so that our women and other members of the community will receive good health care”.