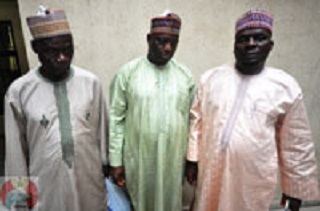 The Economic and Financial Crimes Commission, EFCC, on Monday arraigned Yau Gital, who was a former Chief of Staff to the immediate past Minister of the Federal Capital Territory, Senator Bala Mohammed, before an FCT High Court in Gudu on 10 counts of N192m fraud.

Other accused persons arraigned alongside Gital were his former Special Assistant as Chief of Staff to the minister, Shuaibu Yakubu; the Managing Director of Jibmir Ventures Nigeria Limited, Jibril M. Tahir and the company itself.

Gital, who was also a member of the Land Allocation Committee, Federal Capital Territory Administration, allegedly conspired with Yakubu, and Tahir to obtain money from various unsuspecting persons under the pretext of using the money for processing and facilitation of land allocation by the FCDA.

When the charges were read to them before Justice Abubakar Talba on Monday, the accused persons pleaded not guilty to all the counts.

One of the counts read, “That you, Yau Mohammed Gital, being the Chief of Staff to the Honourable Minister of the Federal Capital Territory and member of the Land Allocation Committee, Federal Capital Territory Administration, Shuaibu Yakubu, being a former Special Assistant to the former Chief of Staff, Jibril M. Tahir, being the Managing Director of Jibmir Ventures Nigeria Limited and Jibmir Ventures Nigeria Limited sometimes between September 2012 to March 2014 in Abuja within the jurisdiction of the High Court of the Federal Capital Territory Abuja, with intent to defraud, conspired to do an illegal act, to wit: obtain monies by false pretenses from various unsuspecting persons under the false pretense that the said monies was for the processing/facilitation of land allocation by the Federal Capital Development Authority which you knew to be false and thereby committed an offence contrary to Section 8 (a) of the Advance Fee Fraud and other Fraud Related Offences Act, 2006 and punishable under Section 1 (3) of the same Act”.

Counsel to the accused persons, Nura Imam, applied for their bail after they pleaded not guilty to the charges.

But Justice Bello ordered the accused to be remanded in prison custody pending ruling on the bail application.

The ruling was fixed for July 2.