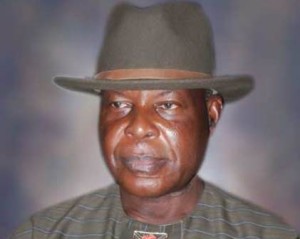 Chairman of the Police Service Commission (PSC) Mike Okiro has alleged that a former protocol officer in the commission, Aaron Kaase, and a journalist he refused to name attempted to blackmail him over an allegation that he defrauded the PSC of N350 million.

Kaase had written a petition accusing the PSC boss of embezzling N350 million which he allegedly collected from the Office of the National Security Adviser (NSA) under the guise of spending it on the just concluded general elections, but diverted into private pocket.

Sources say the PSC staff had given the information to a journalist who wrote a story on the issue but his editor informed Okiro who found out that it was Kaase that leaked the secret.

Okiro, who addressed a news conference in Abuja on Monday, stated that the unnamed journalist demanded N10 million not to publish the petition. He denied there was a fraud in the commission.

He was pressured to reveal the name of the alleged blackmailer, but the PSC boss resisted. He claimed that the journalist was instigated by Kaase to extort money from him.

“On April 2, 2015 at 2.20pm, I received a text on my phone, which read, “Afternoon sir, can you kindly call me? Am working on a story over alleged N350 million loot in your commission. It was from a journalist (name withheld).

“When I called him, he stated that there was a petition to the EFCC and ICPC alleging that I defrauded the commission of N350 million and that the petition was sent to six newspapers to publish. He concluded that he needed to see me urgently, I told him I was not in Abuja and would see him when I return.

“When I came back, he came to my residence and claimed he had spoken with the editors of the newspapers who had agreed not to publish the story on the grounds that I give them N10 million to share. He said that ‘Gen. Buhari is coming to fight corruption, once the papers publish any such story against you, he would remove you immediately.”