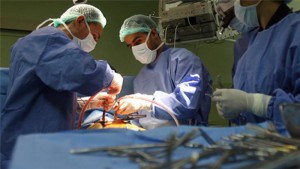 An Italian neurosurgeon has unveiled plans to perform the first human head transplant by the end of 2017. Dr Sergio Canavero announced his plan at the annual meeting of the American Academy of Neurological and Orthopaedic Surgeons in the US state of Maryland on Friday, saying he believes he has a 90 percent chance of success. Aljazeera has more:

He said his patient will be a 30-year-old Russian man, Valery Spiridonov, who has the muscle-wasting disease, Werdnig-Hoffmann. “Of course there is a margin of risk, I cannot deny that,” Canavero said. “I made the announcement only when I was pretty sure I could do it.”

Both men, who have been in regular contact through video chats, believe the controversial procedure is Spiridonov’s best hope, the Reuters news agency reported. “If it goes good, I think I will get rid of the limits which I have today and I will be more independent and this will much improve my life,” Spiridonov said.

“We are making a huge step forward in science and I hope it will be OK.” Canavero is quick to point out that few with Werdnig-Hoffmann disease reach adulthood.