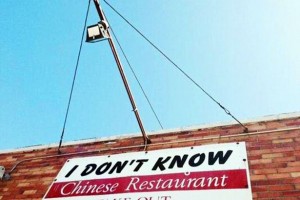 There’s a new Chinese restaurant in Rochester. The name? I Don’t Know.

Seriously, the I Don’t Know Chinese Restaurant recently opened in the western New York city. Owner Jessie Dong tells the Democrat and Chronicle of Rochester (http://on.rocne.ws/1K98JYg ) that she came up with the unusual name because whenever she would ask her three children what they wanted to eat, their response would be: “I don’t know.”

Dong said when it came time to name the new restaurant, her family didn’t know that either, hence the name I Don’t Know.

Dong is a native of Guangdong province in China and now lives with her family in the town of Greece, a Rochester suburb.