Home Metro News Nigerian Judiciary Prepared More Than Ever Before To Rid Itself Of Bad...
Facebook
Twitter
WhatsApp 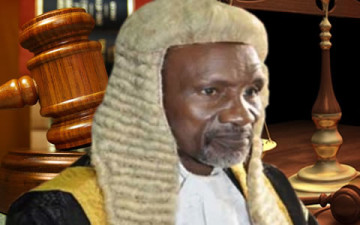 The Chief Justice of Nigeria, CJN, Justice Mahmud Mohammed, on Monday, lamented what he termed the devastating influence of unscrupulous, fraudulent and corrupt persons occupying judicial positions in Nigeria.

The CJN spoke in Abuja during an induction course for new judges and khadis, organised by the National Judicial Institute (NJI).

The theme of this year’s course is “Inculcating Judicial Values in Newly Appointed Judicial Officers”.

Justice Mohammed noted that the Nigerian judiciary is more than ever before, prepared to kick out bad eggs within its fold.

According to the CJN, “the Nigerian judiciary is now more prepared and more poised than ever before to rid itself of all ugly dirts inflicted on her by unscrupulous, fraudulent and corrupt persons occupying judicial offices in Nigeria.

“The National Judicial Council and the respective states’ Judicial Service Commissions are adequately empowered to remove, with ignominy, any judicial officer or judicial staff that has chosen the path of dishonour to be corrupt and fraudulent.

“The Code of Conduct covers all aspects of all the judicial officer’s life both in and out of court. It must be studied, digested and imbibed by all judicial officers in Nigeria.

“Every judicial officer must abide by the Code of Conduct for Judicial Officers of the Federal Republic of Nigeria, the Judicial Ethics as expounded in the Bangalore principles of Judicial Conduct.

“Any judicial officer that does not abide by the Code of Conduct is on his way out of the Nigerian Judiciary”.

In a welcome address, the Administrator of the NJI, Justice Rosaline Bozimo (rtd), reminded the judges that their primary responsibility was to interpret the law without bias, affection or ill will.

“You ought to be the epitome of morality, the bastion of the rule of law, the protector of the oppressed and the punisher of evil doers. It is against this background that the general public is interested in what the Judges do in the temple of justice.

“The country and its citizens expect a diligent and effective administration of justice from the Nigerian judiciary. We cannot afford to fail them”, she said.