A US-based Ukrainian startup manager has outwitted a Nigerian scammer who was set on extorting money from him. 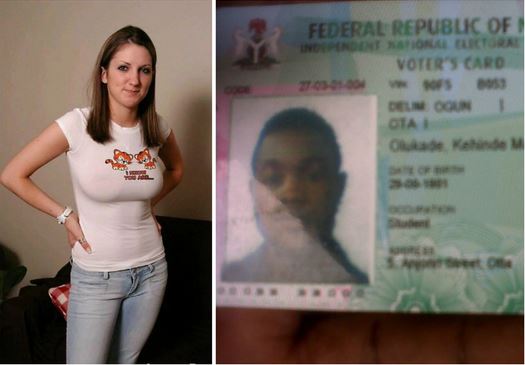 Artyom Geraschenkov became acquainted with the fraudster, who was posing as a white female ‘Angelina Crane,’ via one of Russian social media sites.

‘Angelina’ told him she was an American currently residing in Nigeria and asked if he could help her financially by transferring 50 or 60 US dollars a week. Mr Geraschenkov, who immediately understood the fraudulent motive behind his new ‘lady’ friend’s request, decided to play along and expose the scammer.

He replied by saying ‘Angelina’ was worth more than just $60 and suggested sending $500-600 instead. ‘Angelina’ happily agreed and sent her personal details necessary for making the monetary transfer – including the documents with the real name and photograph of the scammer, Olukade Kehinde Martins.

However, this was when Mr Geraschenkov told ‘Angelina’ he was a dealer with Apple and had, coincidentally, to ship 200 iPhones to Lagos, all of which but one paid for by a local Apple store.

The Ukrainian promised her she could take two iPhone devices if she compensated the cost of one of them, explaining that it would be impossible to ship the whole batch of phones to Nigeria without leaving one unpaid for.

Eventually, Mr Geraschenkov managed to persuade Angelina-Olukade to send him $600. Once he received the money, he told the scammer he, too, was a Nigerian residing in Lagos.

In an interview with a Russian media outlet Meduza, Mr Geraschenkov said he returned the money to the Nigerian scammer, half-jokingly admitting that a clean “karma” was more important.