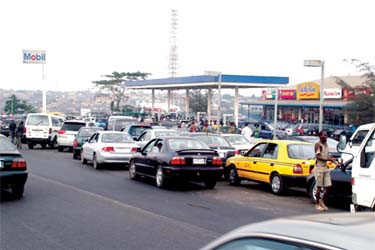 The Nigeria Labour Congress has called on President Muhammadu Buhari to find lasting solutions to the unending scarcity of petroleum products in the country, which appears to have defied solution in the last four years.

The acting President of the NLC, Kiri Mohammed, who made the call on Wednesday, said that beyond media reports of promises, the crisis had slowed down the economy and caused hardships to most families and homes, adding that workers in the formal and informal sectors were worst hit by the development.

“It has become extremely difficult for workers to get to work, because of the perpetual scarcity of petroleum products, which has burdened their salaries as they now have to pay exorbitant transport fares to commute to work, even as majority of them have not received salaries in months”, the NLC said.

“This has become worse, as public transportation are scarce, due to unavailability of fuel, and this might cause workers to stop resuming at workplaces”, it added.

The NLC wants the Buhari administration to take full control of the situation by declaring a state of emergency that would ensure that all retail fuel outlets across the country were selling fuel at the official pump price of N87 per litre.

Warning against allowing itself to be blackmailed by oil marketers, the labour union said the scarcity of petroleum products and lack of electricity were some of the reasons the country’s economy was in dire strait, requiring serious government attention.

While commending the government for taking steps to confront the prevalent terror attacks in some parts of the country, the NLC urged government to also see the scarcity of fuel as another major challenge that must be given utmost priority.

“This scarcity must end, and the government must do much more to ensure it ends, otherwise our economy will sure suffer higher damages”, the NLC said.

The congress reiterated its opposition to calls for the removal of fuel subsidy, saying if the scarcity of petroleum products was a ploy to arm-twist government to justify the decision, it would not enjoy the support of workers.

The NLC said although the petroleum industry was embroiled in underhand dealings as criminals have totally seized a loose system, government must not abdicate its responsibilities by using the ineffectiveness and sleaze of the system to deny the Nigerian people quality and productive life through fuel subsidy removal.

“Till date, none of the people accused of compromising fuel subsidy funds have been effectively prosecuted, jailed or compelled by any court to return to the public treasury looted monies. Ordinary Nigerians should not be made to suffer the consequence of the ineptitude of any arm of government”, the NLC said.