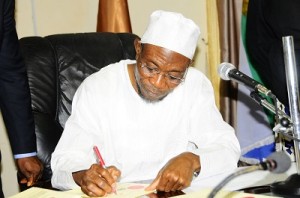 Osun State Governor Rauf Aregbesola, Tuesday said he was helpless concerning the the non-payment of seven months salaries to the workers in the state.

Speaking at the inauguration of the sixth State House of Assembly, the governor, however, expressed optimism that the situation would soon change. He admitted that the unpaid salaries was a painful situation as the workers were not able to take their wages after hectic work done.

Aregbesola also lamented that members of the Assembly were being inaugurated at a time the state was sick financially and called for their commitment to the state to overcome the challenge.

Civil servants in the state are currently on strike over the non-payment of salaries. The workers argued that albeit reduced, the state had been receiving monthly allocations from the Federal Government but just decided not to pay salaries. Association of Finance Commissioners in Nigeria had also said no governor had any excuse for owing workers as they were advised to prioritize payment of workers’ salaries at this time of cash crunch.