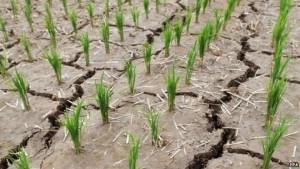 North Korea says it is facing its worst drought in a century, sparking fears of worsening food shortages.

State news agency KCNA said main rice-growing provinces had been badly affected and more than 30% of rice paddies were “parching up”.

Hundreds of thousands of North Koreans are believed to have died during a widespread famine in the 1990s.

This drought is unlikely to be as deadly because of recent agricultural reforms, correspondents say.

The United Nations World Food Programme says North Korea regularly faces significant food shortages and currently about a third of children in the country are malnourished.