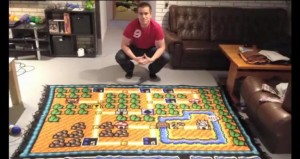 A Norwegian Nintendo superfan said it took him 6 years to crochet a map from Super Mario Bros. 3 into a 7-foot, 2-inch-long blanket. Kjetil Nordin’s blanket, which also measures 5 feet and 10 inches across, depicts the map from World 1 of Super Mario Bros. 3 for the original Nintendo Entertainment System.

“The hardest thing has been to accept that it took such a long time. I’ve spent 800 hours crocheting and many hours researching and searching for the correct yarn,” Nordin told Norwegian public broadcaster NRK.

Nordin, who hails from Hjelmeland, Norway, and currently works as a computer programmer in Roskilde, Denmark, said his commitment to 8-bit accuracy added time onto his project.

“When the water was half way finished I saw that I had chosen the wrong shade of blue. It was almost purple, and very ugly, so I had to undo all of it. That took an extra week,” he said. Nordin said he hasn’t decided on a follow-up project. “I have no idea, but I’ve gotten some suggestions. I spent such a long time thinking before I chose this project, so I can’t rush it. I’ll have a break, and think for a while,” he said.