Home Metro News Not Only The States Are Broke, The FG Is Also Broke And...
Facebook
Twitter
WhatsApp 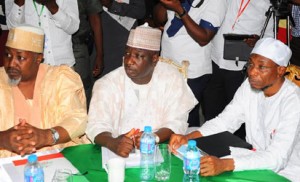 Edo State Governor, Adams Oshiomhole has called on President Muhammadu Buhari to block all leakages and then go after those who have stolen the country’s money and force them to return what they have taken unlawfully from the national purse.

Speaking with journalists after the meeting of the governors in the country where they deliberated on the country’s present financial situation and solutions, going forward, Oshiomole noted that the country’s financial issues is not just because oil prices have fallen but because some people have stolen.

“I think the media is not being accurate, the country is bankrupt, not just the states. The Federal Government’s finances are even worse, considering that they borrowed over N4 trillion. The entire funds for pension scheme has been drawn down by the Federal Government. It is because they borrow at will that you can’t seem to see that they are also bankrupt. So, when we talk of bankruptcy, we should be talking about serious national economic crisis that is not limited to states.

“What people don’t look at is that oil price is dropping. It is not the drop in oil price that is causing the crisis, it may have accentuated it, but it is not the primary cause. Even at $60 per barrel we could do a lot better if so much hasn’t been stolen, first under the so-called excess crude, direct stealing in the guise of subsidy, and stealing from excess crude to fund all kinds of things.

“We have various agencies, treasuries are empty. So, it is not because of the drop in oil price. The real way forward is for the new government to block all the leakages and then those who have taken it to return what they have taken unlawfully from the national purse.

“There will be enough even at $60 to keep Nigeria going. Government’s primary purpose is not just to pay salaries. Salaries are as a result of work and that work is people delivering services which is what the civil service is meant to do. We have to talk about government meeting its obligation to the people which of course include the payment of salaries.

“We expect that the excess crude must have appreciated. So why has it gone down to $2.5bn, when and for what? These are issues that need to be addressed and we must stop the bleeding. Obviously as they say no nation earns enough to meet the greed of leaders, but we earn enough to meet the legitimate need of our people. So. if we are not able to meet the need, it can’t be explained by drop in price.

“You recognise as media people that oil dropped to $9 under Gen. Abdulsalami Abubakar, but salaries were being paid. So. it is not about price, it is about very huge theft of public funds.