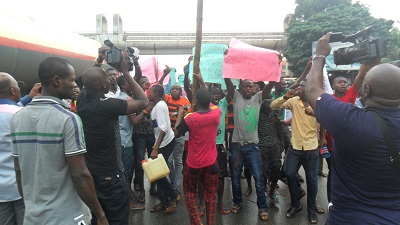 The Nigeria Prisons Service has dismissed as untrue, rumours that the Federal Government has concluded plans to transfer several Boko Haram suspects to prisons in Anambra State.

Commercial activities in the state were grinded to a halt yesterday as traders took to the streets to protest the planned move.

The traders and other residents blocked the Enugu-Onitsha Expressway chanting songs suggesting they would be forced to revive the agitation for Biafran Republic if pushed to the wall.

The protesters carried placards bearing inscriptions like ‘Buhari should not destroy the peace in Anambra State’, ‘Biafra kanyi choro’ (We want Biafra), ‘Buhari, Igbos cannot accept your prisoners’, ‘We do not want Boko Haram in Anambra’, ‘Federal Government, why extend Boko Haram to Anambra?’ and ‘Boko Haram prisoners are not allowed here’.

Reacting to the rumour, the NPS Public Relations Officer, Francis Enebore, said most of the terror suspects in prison custody are still awaiting trial and cannot be moved out of the jurisdiction of the court where they would be prosecuted.

Mr. Enebore insisted that there is no substance in the rumour and blamed the protests on misinformation.

Enebore said, “Most of the terror suspects are awaiting trial and so, there is no way they can be moved to another state because they must be tried in the state where they committed the crime.

“Apart from this, our duty is to move them from prison to court for trial and since they have not been convicted, how can we transfer them to other states outside the jurisdiction of the court where they would be tried? People are just saying things they know nothing about, there is no truth to the rumours that we are transferring terror suspects to other states”.