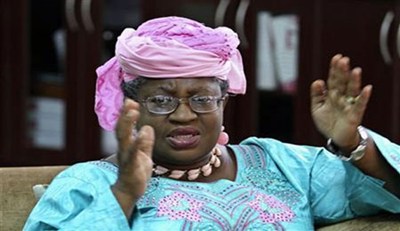 The National Economic Council (NEC) chaired by Vice-President Yemi Osinbajo, on Monday accused former Minister of Finance and Coordinating Minister of the Economy, Dr. Ngozi Okonjo-Iweala, of spending $2.1 billion from the Excess Crude Account without authorisation.

“We looked at the numbers for the Excess Crude Account. The last time the former Minister of Finance and Coordinating Minister of the Economy, Mrs Ngozi Okonjo-Iweala, reported to the council, and it is in the minutes, she reported by November 2014 that we had $4.1 billion,” Edo State Governor Adams Oshiomhole told State House correspondents after the NEC’s 58th meeting in Abuja.

“Today, the Accountant-General’s Office reported we have $2.0bn. Which means the honourable minister spent $2.1bn without authority of the NEC and that money was not distributed to states, it was not paid to the three tiers of government,” he said.

According to the economic council, the ‘unauthorised’ spending is among the several anomalies discovered in the management of the nation’s economy between 2012 and May 2015.

Within the period, the Nigerian National Petroleum Corporation (NNPC) was said to have earned a total of N8.1 trillion but remitted only N4.3 trillion. A panel has, thus, been set up by the Federal Government with Oshiomhole, Kaduna State Governor, Nasir el-Rufai; Akwa Ibom State Governor, Udom Emmanuel; and Gombe State Governor, Ibrahim Dankwambo, as members, to probe the NNPC and the ECA between 2012 and May, 2015.

“The four-man committee will check the books of the NNPC, most especially the issue of excess crude and what is not remitted into the Federation Account,” Yari said.