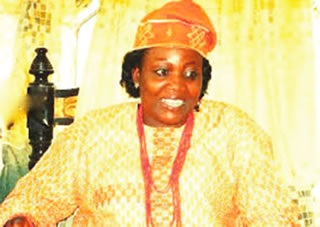 The Ondo State Police Command has advised the family of the abducted regent of Akungba Akoko, Princess Oluwatoyin Omosowon, against paying any money to her kidnappers as ransom for her release.

The regent alongside three of her aides were kidnapped last Tuesday evening on the Ikare-Owo expressway in the Akoko Southwest Local Government area of Ondo State while en route Akure for the 69th inaugural lecture of the Federal University of Technology, Akure.

Reacting to the N20 million ransom purportedly demanded by the kidnappers, the State Police Public Relations Officer, Mr Wole Ogodo, advised Princess Omosowon’s family not to establish any contact with her abductors without involving the police.

Ogodo also advised the family to get the Police involved in any step they would be taking to secure the release of the regent.

The Police spokesman said, “We read in the newspapers that the kidnappers have demanded N20million ransom from the family, if they make calls, they should let us know so that we can work on it.

“Some people in that condition would secretly pay ransom and after the victim had been released, the family would not let the police know again. If they let us know about this development, we will work on it and arrest the kidnappers. If they pay any ransom without informing the police, they are not helping matters, and police are not party to payment of ransom”.

Mr. Ogodo, however, expressed optimism that the regent would be freed very soon as the police command had stepped up efforts to secure her release.

In a related development, the President of Akungba Akoko Development Union, Dr Lawrence Ekundayo, said nobody in the family had been contacted over the issue of ransom payment.

According to Ekundayo “The kidnappers have not established any contact with the family; the regent has a mother, father, husband and many relatives. The news that the kidnappers have demanded for the sum of N20million is only a rumour. As I speak with you, nothing of such has happened. We are only praying to God for her release”.