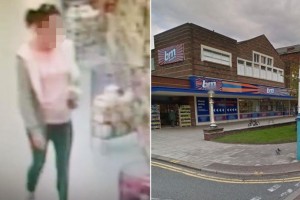 Imagine this: You’re in a shop, strolling up and down the aisles trying to find yourself a bargain. So far, so normal. Add into the equation a woman, who you then see walk up aisle you are on and begin to defecate on the floor. Yes, this is definitely no longer normal.

According to Closer Online, But this bizarre senario happened to shocked bystanders in a B&M Bargains store, believed to be in Stockport, earlier this month.

The un-known woman can be seen wandering up an aisle before crouching down and relieving herself. She then covered the mess with baby clothes, thought to be worth £40, and incredibly continued to shop in the store.

On social media, some staff from the store called her act “filthy” and “disgusting”. It certainly is very, very strange.