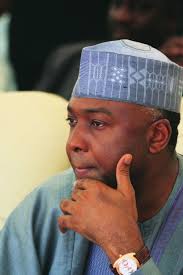 I can’t think of anyone likely to be inspired by the Senate led by the scheming, diabolical and treacherous Kwara Senator, Bukola Saraki. The illegal election of Saraki as the Senate leader has further driven the Senate to a new low.

Right from the days of David Mark, the Senate has become a more dyspeptic and dysfunctional institution. The continuous narrative of our nation informs us that corruption is the most essential leadership qualification in Nigerian politics. To be a member of the National Assembly you must be a certified or licensed thief.

There are many reasons individuals stand for election for public office. However, sooner or later all elected representatives would realize that they’ll have to follow party discipline rather than their primitive personal ambition and agenda.

Party discipline is likened to team spirit in sports. It’s like a team sport of soccer, basketball, and baseball. It is dependent on mutual trust, on close cooperation by all members of the team and confidence that each member will play his role.

Party discipline is also the unwritten rule that forces senators or reps to set aside their personal ambition or agenda if they conflict with the decisions made by their party. Of course dissent can be voiced in caucus meetings which are usually held behind closed doors.

In civilized democracies, the leadership of a party has the power to control its members in the legislature. Party discipline therefore is the ability of a party leader to get his party’s legislators to support the party line rather than follow their narrow, selfish motives. Party discipline is the guiding principle of democratic centralism. Indeed, V. I. Lenin rightly argued, it is “unity of action, freedom of discussion and criticism.”

The party is supreme. Party supremacy give party leaders with the capacity to enforce  discipline even when the members disagree. Discipline is a necessary aspect of party cohesion in any multiparty setting. Party leaders exercise their influence over a group of people who have chosen to join the party, whom the party has agreed to accept, and whose support the leader may rely. The party leadership exercises his power and influence in the selection or election of members for legislative offices.

There is no crucial time for party discipline than now in Nigeria when Nigerians clearly and loudly said “YES” on March 28 to the much needed change to rescue Nigeria from destruction and ultimate oblivion  Iron party discipline is a prerequisite for the All Progressives Party (APC) before it can successfully fulfill its campaign promises of war on corruption, freedom, and better life for Nigerians.

Saraki has demonstrated so far by his utterances and actions beyond any reasonable doubt that he’s not ready or willing to abide by APC’s party discipline and party rules. He has factionalized  the party with his clique of  political criminals. With his latest action by blocking party nominees for legislative offices and by appointing a member of the PDP opposition party as his deputy, Saraki has once again defected to PDP. Needless to say, this is incompatible with party spirit and continued membership of the party.

A party member is obligated to defend party unity – the major determinant for party strength and power. Those guilty of violating the rules of the party, and party discipline or party morality must answer to the party. Saraki has violated all.

The historical emergence and experience of APC, requires a member to be an active, selfless fighter for the implementation of President Buhari’s agenda. Any retreat from APC’s requirement of party discipline which the PDP defectors and revisionists like Saraki and co have embarked upon, leads to the party’s degeneration into a reformist anarchist or pseudo democratic organization.

We know democratic norms, principles, and etiquette, and the rule of law are alien to Nigerian politicians. This is so because majority of our politicians are criminals, thugs, ruffians, scalawags, barbarians, drop-outs, failures, name it. Because of their animal nature, love of power, and their propensity for looting of public treasury, they have no regard for democratic rules and law and order.

Take a survey of Nigeria’s political landscape and see how elected officials – governors, legislators, ex-presidents – go about the business of governance. What do you see? One example tells the complete story. Remember Ayodele Fayose the Ekiti State Governor? Remember how he became the governor? Remember how he chased 19 APC elected representatives of Ekiti people out of town and governed the state with seven PDP legislators?

Remember how he beat up a judge who was presiding over his case? Remember how he sealed off Ado-Ekiti the state capital from the rest of the world by blockade of timber logs, buses to prevent 19 APC legislators from coming to town to discharge their duties? Remember how he locked up the state House of Assembly to prevent the lawmakers from entering? Till tomorrow Fayose still presides over the state. Where in the world with democratic system of government could this happen or tolerated? Only in Nigeria.

Saraki  has borrowed a leaf from Fayose’s Principles of Democracy – hooliganism and total disregard for democratic civilization. Since majority of the senators are thugs, criminals, and hoodlums headed by Saraki the Ogboju Ole (the bravest thief), it will amount to time wasting and a barren exercise for President Buhari to deal with Saraki in a democratic way. The only language the Sarakis of the world understand is the language of hooligans. And that’s how Saraki should be ejected from the Presidency of the Senate.

Here is how President Buhari can oust the Saraki by nuclear option. The first choice is to make him answerable to party rules and discipline. And if found guilty, he should be expelled from the party. Once that’s done, the President should appoint the party’s choice for the Senate President and Deputy Senate President.

While the expulsion brouhaha rages, Buhari should appoint a new no nonsense chairman of EFCC, establish a Corruption Court headed by a tough judge sympathetic to Buhari’s mission. Give presidential marching orders to the EFCC chairman and the judge of the new Corruption Court to speed up corruption and fraud cases including Sarakis, that have languished for years. After all, Saraki is scheming to abscond from justice from his many pending fraud and corruption cases with the EFCC. With that in place, Saraki will be slammed into the cooler for the peace, progress, and prosperity that we voted for on March 28.

The second choice, is for Buhari to  invoke his presidential powers and that of the Commander-in-Chief and federate the National Assembly with soldiers and police and install the party’s nominees for the Speaker of the House as well as the Senate President. He should also instruct that henceforth all legislative business would be conducted with heavy military and police presence to provide security in the National Assembly  until sanity is fully restored.

Yes, this may sound undemocratic. But this is Nigeria where democracy has never worked, it’s not working and will never work. If Fayose and Jonathan could get away with murder, why not Buhari? As a matter fact, Buhari will not be committing any impunity because (1) public opinion is solidly behind him, (2) Nigerians want to see the changes they voted for March 28 take place, (3) Nigerians are willing to remove obstructionists and traitors like Saraki who are out to derail their mandate, and (4) Nigerians want Buhari to get the job done any how and by any means necessary.

Saraki has shown irritating and visible contempt for the President and his VP. He once described Vice-President Yemi Osinbajo as a “mere commissioner.” Saraki is uninformed that under the presidential system the Seante President has a special responsibility to work with the President.

He failed to demonstrate that the Senate is a place where Senators have to subordinate their individual agendas and obdurate ambitions to take collective action through principled compromise. Saraki is not aware of the fact that the pursuit of national interest and commitment to the institution of the Senate is paramount.

By the way, who the hell is Bukola Saraki? We didn’t vote him as the president. He won the Kwara senatorial seat with paltry118, 879 votes against his PDP challenger Abdulrasak Abdulrahman who garnered 66,864 votes. Nigerians overwhelmingly elected Buhari with over 15 million votes. How can a criminal hold the mandate of 15 million plus Nigerians hostage? Who cares whether he’s the biggest fund raiser for the Buhari campaign. He’s not the financier of the people’s mandate given to Buhari March 28.

President Buhari and APC leadership should not raise their hands in the air as if there wrists were handcuffed by Saraki. Nigerians have sacrificed too much and for too long for change. We’ve gone too far now to be derailed by Saraki Ogboju Ole (a brave thief). The political nightmare and historic crisis initiated by Saraki must be nipped in the bud – NOW!