Home National News Opinion Lala Fortes Is Human And No Goddess; Why The Fuss? By...
Facebook
Twitter
WhatsApp 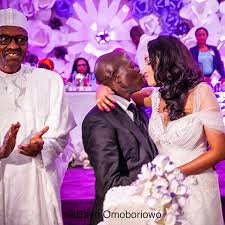 It’s really baffling the way Governor Adams Oshiomole’s wedding to his heartrobe, Lala Fortes has been causing a whole lot of media backlash – not particularly because he’s marrying another woman just after five years of his wife’s demise – a man has got to do what suits and pleases him despite what people feel or say, but on the annoying note that the lady is too pretty and sophisticated to be his wife, and that she’s obviously married to the governor’s wealth.

Such odd thoughts emanating from the people go against the law of creation. When God created man, he made woman out of the man and gave the man dominance over the woman. No matter how highly placed a woman may be, she still will always be under a man. Any man who understands this simple fact sees a woman despite her status as a creature and not a demi-god.

Really wondering why the marriage of the couple has been receiving such criticism on the media. Is Adams Oshiomole not man enough to have Fortes as a wife? Some have even said she looks way too pretty for Adams who they termed ugly and that she’s certainly in for his money. There certainly would be more a good reason why the lady is married to him than the wrong perception people are having.

Money they say is not everything. There have been cases where the most ugly men, even without money, get the best and prettiest ladies. It’s not just always about the money, it’s about the content and character of that individual which in turn will amount to the desired success. It takes a confident man in such situation, who understands that no matter how highly placed and beautiful a lady is, she is to be asked out and it’s her choice to either accept or not. Not all beautiful and sophisticated ladies are materialistic.

Come to think of it, Adams Oshiomole, despite his looks, current position as governor and financial status, is a man worthy of being loved for who he is and not what he is, by any ambitious lady no matter how pretty and sophisticated she may be. His doggedness and resilience are some great qualities worthy of endearing  any kind of woman to him no matter how pretty and sophisticated she is. His days as the Nigeria Labour Congress leader was one that can be compared with no other. His tenure as the labour union leader saw the government receive massive protest whenever there was a hike in fuel price, an act which made him gain the love and confidence of Nigerians which eventually culminated into him becoming the governor of Edo State, a position he still maintains.

A similar case is that of the late Odumegwu Ojukwu who married Bianca, a one time beauty queen, as his second wife. It was at that time said that she got married to the warlord because of his wealth and that he obviously was too old for her. One needed no soothsayer to tell that Bianca marrying Ojukwu was not because of his wealth as she was the daughter of a wealthy businessman, but for the great qualities of the late Odumegwu Ojukwu.

The choice has been made by the couple, and its obvious neither Fortes nor Oshiomole care about what people feel or say.