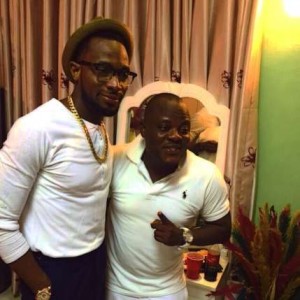 After a disagreement of millions of naira, Oritsefemi fired his manager, Yusuf Adebola Adepitan aka Danku.

The latest news now is that the manager has begun to warm up to acclaimed close associate of Oritsefemi, D’banj.

Danku has been doing all he can to get the attention of D’banj, whom Oritsefemi is said to have respect for in the Nigerian music industry.

While Danku has continued in his stride to make a successful career out of singing, his relationship with former client worsens by the day.

According to an insider, Danku is hoping on lashing on D’Banj’s wing to help nurture his career and give it the necessary push.

It is unsure what D’Banj’s response to Danku’s advances is neither has the pop singer waded into the Oritsefemi’s fight with Danku, but Danku has been warming up to the singer especially on social media where he refers to himself as Dankulee and has been reposting and retweeting all of D’Banj’s tweets and Instagram posts.