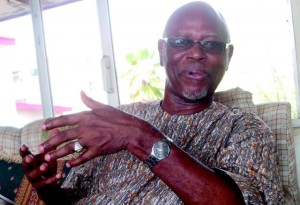 The national chairman of the All Progressives Congress (APC), Chief John Oyegun has appealed to the party’s incoming lawmakers to respect the decision collectively taken on the leadership of the 8th National Assembly.

According to him, the incoming lawmakers out of their own volition on Saturday last week organized a mock election that produced Senator Ahmed Lawan (Yobe State) as candidate for the senate president and Hon. Femi Gbajabiamila from Lagos State as the Speaker of the House of Representatives.

“I want to appeal to APC members of the National Assembly, both Senate and the House of Representatives to please respect the party, the views of the party and the decision that they themselves took in selecting the persons that will be presented to the National Assembly as presiding officers: the House of Representatives level, Hon. Femi Gbajabiamila and at the Senate level, Distinguished Senator Ahmed Lawan,” Oyegun said at a press conference in Abuja on Monday.

“I want to make it quite clear that all the party did was to provide the platform for all elected members of the party only. No other person joined them in stating their preferences. It is still left for the house itself to elect their own leaders and the house is made up of both APC and non non members.

“But we, the APC thought rightly in my view that we should provide a platform for our members of the National Assembly to state their preferences for the key offices in both the House of Representatives and the Senate. This they have freely done by themselves in the presence of the party leadership and almost the entire NWC.”

Supporters of Senate Bukola Saraki and Hon. Yakubu Dogara have faulted the process calling on the party to allow the lawmakers choose their leaders themselves.