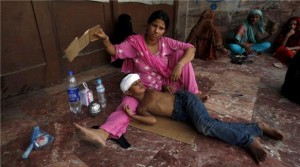 A heat wave has killed almost 450 people in Pakistan’s south over the past three days, with paramilitary forces beginning to set up emergency medical camps in the streets, health officials have said. Aljazeera was there:

Most of the deaths have been in the southern port city of Karachi where temperatures in the surrounding Sindh province reached up to 45C on Saturday. Hospitals have been swamped with people suffering from heatstroke and dehydration, while repeated power outages have left many without air conditioning or running water.

The electricity grid, run by a private company, K-electric, has been overwhelmed as people switch on fans and air conditioners, and as families begin to cook at the same time during the month of Ramadan.  Electricity cuts in turn crippled Karachi’s water supply system, hampering the pumping of millions of litres of water to consumers, the state-run water utility said.

Al Jazeera’s Kamal Hyder, reporting from Islamabad, said the official death toll had risen sharply to 445 by Tuesday, as many of those who died were already in a critical condition when they were admitted to Karachi hospitals in previous days. “Most of these people are very poor because there are a lot of people who are living on the streets, the victims are elderly,” he said.