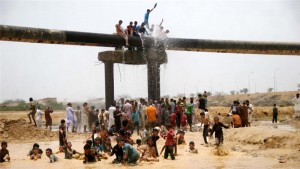 The death toll from a severe heatwave in southern Pakistan has climbed past 1,000, even as cooler conditions brought some relief to the region. Temperatures in Karachi and surrounding areas in Sindh province dropped to the high 30s on Thursday after five days of heat in the low-mid 40s. Aljazeera has more:

Despite the drop, the death toll continued to rise, with Pakistan’s National Disaster Management Authority saying that army and ranger units had been deployed to help those suffering through the crisis.  “They have set up 29 heatstroke centres across the province. They have been distributing around 77 tonnes of mineral water,” Major General Asghar Nawaz said on Thursday.

The recent spike in temperatures has come as many in Muslim-majority Pakistan fast during daylight hours to observe Ramadan, further exacerbating the situation.

Victims of the heat wave have died of heat stroke, dehydration or other heat-related illnesses – with the elderly and poor the worst-affected groups. Dr Seemin Jamali, a senior official at the Jinnah Postgraduate Medical Centre (JPMC), Karachi’s largest government hospital, told Al Jazeera that the centre’s mortuary was “overflowing”. “They are piling bodies one on top of the other,” Jamali said.