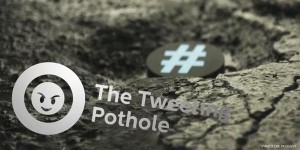 Street potholes in Panama City are tweeting to local authorities every time they get run over by cars, until they get fixed. Scoop has more has more:

In a brilliant use of social media, a news show in Panama City gave potholes in the streets their own voices on Twitter. The crew of Telemetro Reporta installed motion-sensitive devices in craters across the city, programmed to tweet authorities every time cars ran over them, until they fixed the problem!

The makers of the show said that they wanted to highlight how horrible the roads of the city had become and get authorities to take notice and do something about it.

Believe it or not, the tweeting potholes campaign went viral and annoyed authorities so much that they actually started fixing the roads. Workers are now using a map of the most frequently run-over potholes to fix them one at a time.