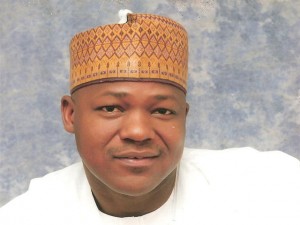 Speaker of the House of the Representatives, Yakubu Dogara, on Friday, said he was not aware of the jumbo salaries being paid to legislators.

“When I hear about jumbo pay for legislators I get confused,” he told newsmen shortly after paying a courtesy visit to Gov. Simon Lalong of Plateau.

“The issue of salary is quite clear because we don’t fix our salaries; it is the responsibility of the Revenue Mobilisation, Allocation and Fiscal Commission to do that,” Vanguard quoted him to have said.

“Any Nigerian that wants the information can take the benefit of the Freedom of Information Act to request for this information from the commission.

“I do know that our salary is not in the region of N1 million per month,” he claimed.

However, the speaker said he was aware of discussions that relate to the allowances being paid to members. The issue, he said, will be given adequate attention by the House of Representatives as soon as it settled down for work.

According to him, the lower chamber of the National Assembly will conduct a legislative needs assessment using competent Civil Society Organisations (CSOs), in conjunction with development partners to ensure Nigerians know the true situation of things in the National Assembly.

He added: “We will do everything possible to ensure that from zonal level, there is fairness in whatever we do there up to the state level.

“And once we achieve that, we are 100 per cent guaranteed that there will be stability even though politics is all about resolving conflicts.

“Conflicts arise as a result of human imperfection; we will never run away from conflicts but we will always rise above conflicts.”