Home National News Odd News REVEALED!!! In Some Parts Of The World Ant Heads Were Once Used...
Facebook
Twitter
WhatsApp 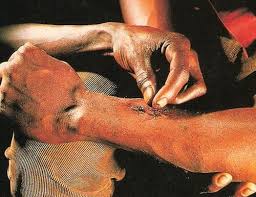 Before needles and string became a staple of medicine, people used the heads of soldier ants to suture their wounds. Read more from Oddity Central:

It sounds like something you would only see in movies, and indeed, the ancient medical treatment was depicted in Mel Gibson’s Apocalypto, but few people know that the scene was inspired by real life. According to survival expert Cody Lundin, who starred on the Discovery reality show Dual Survival, army ants – soldiers that guard the rest of the colony – are known for their whopper mandibles. “I know that in ancient China, they were used as sutures by a lot of native peoples,” he explained on the show.

“Take it on both sides of your wound and it’s going to clamp down on your flesh, and when you pinch off the body, it will hold that wound shut. Once they bite on, they don’t let go. You can physically pull their body away from their head, and they will stay embedded in the flesh.”

Entomologist Grzegorz Buczkowski, from the Urban Ecology Laboratory, however, isn’t convinced. “As an entomologist, I can tell you that the ant mandibles will pinch the skin and could technically help close a wound,” he told Jordan. “But from a medical perspective, I think this is completely bogus. It’s not going to work the same way as a proper medical treatment. And it could cause other problems like infection since ants are not sterile. Overall, I would not recommend this.”