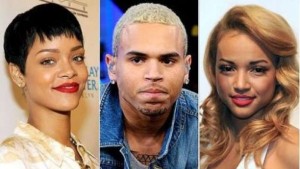 New reports from a reliable source to Rihanna, claim that she believes Karrueche Tran is being ‘Childish and tackish’ for dumping Chris Brown.

According to Hollywoodlife, the source told the site that “Rihanna doesn’t really know Karrueche all like that and doesn’t walk in her shoes. But from her outside perspective, she feels she goes too hard on him and let’s the world in on their business on social media. That’s just tacky and childish! Ri thinks Karrueche needs to give that boy a break,”

The source also said “Karrueche will never know what people in this business like Chris and Rihanna go through on a daily basis,”

“It’s a constant grind. Their schedules are demanding. They’re traveling. They’re in this country today and another tomorrow. It’s exhausting. And on top of all this, Chris has a baby now! That is and should be his number one priority, not Karruche. Not their relationship”

According to reports, Rihanna gave Chris some words of encouragement at the Microsoft Theatre backstage on Sunday, June 28, 2015, before his BET Awards performance.