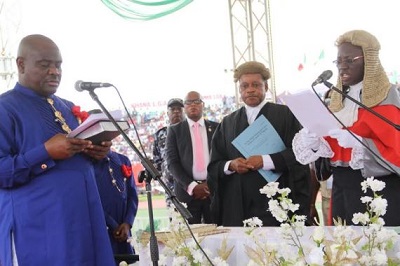 The All Progressives Congress in Rivers State has asked the state governor, Mr. Nyesom Wike, to declare his assets in keeping with the requirement of his office in line with the mantra of the President Muhammadu Buhari-led federal administration to promote transparency and accountability.

The Rivers APC stated this in a statement on Tuesday by its chairman, Davies Ikanya.

“In line with the code of conduct for elected public officers in Nigeria, we wish to advise Chief Wike to hasten to declare his assets”, it said.

“The good people of Rivers State want to know the financial status of the man whom the Independent National Electoral Commission (INEC) wickedly imposed on Rivers State as her Governor.

“They have been waiting for their Caretaker Governor to follow the path of honour by declaring his assets, but he has conveniently chosen not to do so because he apparently has skeletons in his cupboard.

“There is, however, no hiding place for Wike as assets declaration is not optional but compulsory for holders of the office he is accidentally occupying in the interim”.

Mr. Ikanya said the party had earlier chosen to keep quiet on the issue but decided to speak out in view of the governor’s “ill-advised dissolution of Boards and Parastatals and moves to dissolve the constitutionally-constituted Local Government Councils so as to be the sole signatory of the accounts of these boards and local governments in the State”.

The party explained that its desire for the governor to declare his assets became imperative to safeguard the state’s fund from being looted with impunity and misappropriated.

It also alleged that the sole agenda of the Wike administration was to undermine the state treasury.

The APC said, “We know that asset declaration may be very difficult for Chief Wike to do, aware that he cannot give satisfactory account of the source of his lavish lifestyle before he became Caretaker Governor and his possession of most of the choice properties in Rivers State”.

The party, therefore, challenged the governor to prove that he still has a modicum of honour by declaring his assets and making them public.