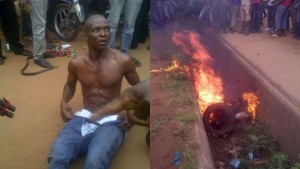 Two more armed robbery suspects were given the jungle treatment as they were burnt to death by an angry mob in Nkpor, Idemili North Local Government Area of Anambra State, barely two weeks after two suspects were also set ablaze after they robbed an Hausa trader at the New Tyres Market.

According to Naija Gist, the incident that led to the recent jungle justice came when the robbers armed with pistols, trailed a woman on a commercial motorcycle with money in a ‘Ghana-must-go’ bag that she was taking to the bank. The suspects allegedly snatched the money from the woman believed to be the cashier of a local bank branch in the town.
After snatching the money, they shot sporadically into the air and in a bid to zoom off, they had an accident with their own motorcycle and the woman and other passer-by who saw the incident raised alarm, alerting a passing police patrol team who went after the hoodlums.
Eyewitnesses report that on sighting the police, the suspects fired shots at them and the police replied but the bullets did not pierce their bodies but they were overpowered by the crowd which dispatched the jungle treatment on them, burning them to ashes.