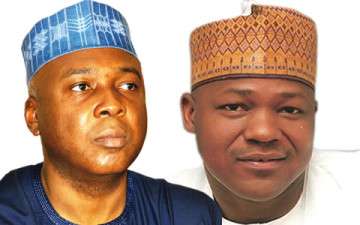 Senate President, Dr. Bukola Saraki and the Speaker of the House of Representatives, Hon. Yakubu Dogara has debunked claims by the former Interim National Chairman of the All Progressives Congress (APC), Chief Bisi Akande that their election as Senate President and Speaker was facilitated by oil barons.

They described the allegation as baseless, false and unbecoming of a respected statesman.

In his reaction, Saraki said: “Ordinarily, we would have ignored the report credited to Chief Akande but for the sole reason that some undiscerning readers might mistake the fiction for the facts. We wish to state unequivocally that it was wrong and mischievous for the statement by Chief Akande to link what happened on the floor of both chambers to some unnamed oil barons. We dare say that the entire story was the figment of the imagination of the author and we make bold to state that in the 7th Assembly, Senator Bukola Saraki was Chairman of the Senate Adhoc Committee which exposed the fraud and mismanagement in the oil sector.”

Also speaking on the issue, Speaker of the House of Representatives, Hon. Yakubu Dogara said that his election and acceptance was as a result of his capacity, experience, spirit of team player, incorruptibility and his progressive mind and which endeared him to his colleagues.

“The allegation by Chief Akande is unbecoming of a well-respected elder-stateman and a former Interim National Chairman of the APC,” a statement signed by Dogara’s Special Adviser, Media and Public Affairs, Turaki Hassan, said.

“We challenge Chief Akande to name the so-called oil barons whom he alleged sponsored the election of the Speaker and in case Chief Akande does not know, the first investigative motion adopted by the 8th House of Representatives under the leadership of the Rt. Hon. Speaker was to investigate the allegation of fraud in the oil-swap contract awarded by the Nigerian National Petroleum Corporation, NNPC.

“A resolution instituting investigation into the allegation was passed with a resolve to constitute an Ad-hoc committee to investigate the NNPC, as well as its subsidiary, Pipelines and Products Marketing Company over the swap contracts. How then can the House under the leadership of Mr. Speaker order investigation into activities of those who allegedly sponsored his election. So, Chief Akande`s allegation is unfortunate and uncharitable.”