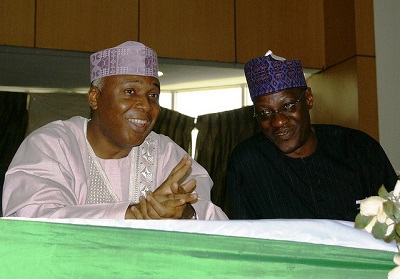 A former governor of Kwara State, Dr Bukola Saraki, has showered encomiums on his successor, Governor Abdulfatah Ahmed, for putting smiles on the faces of Kwarans by implementing people-oriented policies.

Saraki, who is the Senate Committee Chairman on Environment and Ecology, also expressed the confidence that Governor Ahmed would use the opportunity of his second term in office to take the state to greater heights in all spheres.

Saraki’s position was contained in a statement issued by his media aide, Bamikole Omishore.

He added: “His persistence on people-centered policies has endeared him to the hearts of everyone.

“I, Senator Abubakar Bukola Saraki join Nigerians home and abroad to celebrate the inauguration of Governor Abdulfatah Ahmed for a second term.

“Over the years, from the mandate that was first given in 2011 by the great people of our dear state, Governor Ahmed has shown that he is passionate about continuing to build a suitable Kwara for the next generation.

“Unquestionably, Governor Ahmed has met the expectations of Kwarans in the last four years. However, nation building is a continuous exercise.

“I enjoin Governor Ahmed to see the overwhelming victory that was received on April 11 as a challenge to surpass the expectations of all Kwarans, by ensuring that every Kwaran reaps the dividends of our state’s democracy”.

“I also enjoin all Kwarans regardless of political affiliation, to work together with Governor Ahmed and his administration to ensure that our great state continues to develop while being accountable to the people”, he said.