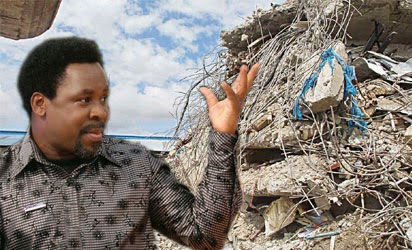 A coalition of some Yoruba associations, known as P‎an-Yoruba Group, has asked the Lagos State Government to drop charges against the Synagogue Church of All Nations led by Pastor T.B Joshua.

The state government began investigation into the collapse of a six-storey building belonging to the church in September, 2014. The incident led to the death of over 100 persons, mostly foreigners.

Head of the coroner inquest, Oyetade Komolafe, had fixed July 8 for judgment.

The group said it hopes to mobilize 1 million signatures from Nigerians across the world to urge the Lagos State Government to discontinue its probe into the collapsed church building.

In statement signed by Suleiman Okunola on Sunday, the group said, “We have launched this campaign today in order to raise public and global awareness about what we consider as a clear case of persecution of the Church”.

The group said that beginning from this week, it will mobilise Pan Yoruba groups and hundreds of civil society groups to join the campaign saying that the Church has contributed immensely to meeting the spiritual, economic and social needs of millions of people in Lagos and across the world including Muslims and Christians and irrespective of ethnic or religious background.

The coalition stated that after the building collapse, the cost and moral responsibilities were left for the church to bear.

According to the group, it appears that the Lagos state government is only interested in prosecuting the church.

“We thought that the government should have shown greater concern and seized the moral initiative to deal with issues like post trauma stress, solidarity for the victims and even paying official visits to some of the families of the victims. All these have not happened. What has happened is that the Lagos state government seems desperate to prosecute and possibly persecute the church”, an act the group claimed is against the tradition and ethics of the Yoruba nation.

Suleiman Okunola stated further: “The Lagos State Government’s response to disasters has been quite interesting. The government has been led by progressives since 1999. However, we are appalled that the same spirit it employed in dealing with similar cases of disasters like during the collapse of mosques, the Ebola outbreak, the Ejigbo canal incident, was all absent in the case of the Synagogue building collapse”.

The group said it hoped that Governor Akinwunmi Ambode “will depart from the past and do what is right”.