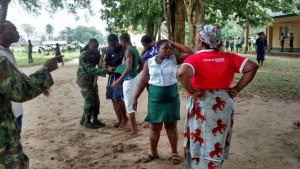 Ozar Secondary School, Asa in Ukwa West LGA of Abia State is scene to a chaotic episode when a student who was sent home by a teacher Mrs Njoku to barb her hair,regrouped with her mother and elder siblings to attack teachers and students who were having their studies. Scoop has more:
The JSS two student, Precious Nwadike who looks like an overfed spoilt brat had earlier been warned by same teacher two weeks ago to barb her hair but she did not heed to the warning. On arrival to school on Monday, the student was asked to go home and barb her hair, she left immediately only to return two hours later with the mother and four of her siblings who marched straight to the staff room while also commanding the teachers to come out.

Furthermore, the mother of the student,Mrs Nwadike held a teacher,pulled her cloth ordered the sons to cut her hair.The intervention of another teacher, Mrs Osuagwu provoked the sons and one of them,Uche knotted and almost strangled her.But the quick intervention of students, led to a free for all fight as Mrs Nwadike and children were fully prepared.

A youth corp’s member serving in the school who pleaded anonymity had to alert the military personnel. Their quick arrival at school calmed the situation and doused the tension. As at the time of filing in d report, Mrs Nwadike and children are now cooling off at Obehie police station,Asa.The Principal of the school Mrs F.N Nwachukwu, as well took the wounded students and teachers to obehie Health Center for treatment.