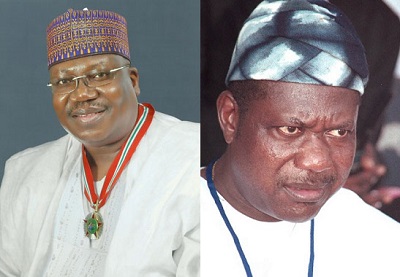 Senators-elect, under the aegis of Unity Forum, have presented a five-point resolution to the national leadership of All Progressives Congress, APC, declaring their support for the Lawan/Akume Senate Presidency ticket just as the party assured them that the extant Standing Order of the chamber will be adhered to in its final decision.

The resolution, which was presented to the National Chairman of the party in Abuja in the presence of some national leaders, was signed by 35 senators-elect out of the 40 members of the forum.

The resolution was signed by Senators Barnabas Gemade, Abu Ibrahim, Olusola Adeyeye, Abdullahi Adamu and Bukar Abba Ibrahim, with the signatures of other members attached.

“This is so, as Ahmad Lawan has spent 16 years in the National Assembly, while Akume has so far spent eight years in the Senate.

“The next behind the duo in terms of ranking, who is also in the contest for the Senate Presidency, is Senator Abubakar Saraki, who has spent only four years in the Senate”.

Still analyzing the outcome of the election, the group posited that “there were three identified voting blocs that ensured the victory of APC in the elections: the Hausa-Fulani bloc, the Yoruba bloc and the Northern minorities bloc.

“Thus, the Hausa-Fulani bloc is represented by the President in this government, the Yoruba bloc by the Vice President.

“Nomination of Senators to serve as Presiding Officers and appointments of Principal Officers and other Officers of the Senate or on any parliamentary delegations shall be in accordance with the ranking of Senators.

“In determining ranking, the following order shall apply: Senators retiring based on number of times re-elected, Senators who had been members of the House of Representatives, and Senators elected as Senators for the first time”.