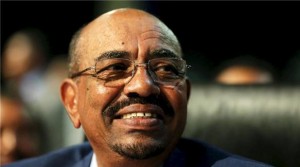 Local media have reported that Sudanese President, Omar al-Bashir has flown out of South Africa, despite an ongoing high court case which is hearing an application for his arrest. The South African state broadcaster, SABC, reported at about 10:15 GMT on Monday that President Bashir’s plane had flown out of the Waterkloof air force base, on the outskirts of Pretoria. Aljazeera has more:

Al Jazeera cannot independently verify whether the president has left the country.  The lawyer appearing on behalf of the South African government, however, told the high court in Pretoria that President Bashir was not on the list of passengers in the Sudanese plane that left Waterkloof base.

Earlier, Sudan Information Minister Ahmed Bilal Osman told Al Jazeera at about 09:00 GMT on Monday that the president would return to Sudan within hours. “He is coming back to our country in one or two hours,” he said, adding that it did not matter if the court ordered Bashir’s arrest, as it had no ability to enforce such an order.

“The judiciary…does not have policemen. The president is there [in South Africa] and no one is going to arrest him.” An interim order was made by the high court in Pretoria on Sunday, barring President Bashir from leaving the country pending an application from civil society organisations, calling for his arrest.