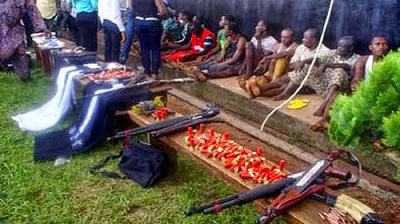 The Inspector General of Police, Mr Solomon Arase, has directed that the 11 leaders of suspected cult groups arrested in Edo in May, be arraigned on Tuesday, having completed investigations into their matter.

Arase’s directive is contained in a statement issued by CP Emmanuel Ojukwu, the Force Public Relations Officer, on Monday in Abuja.

The statement recalled that the suspects had played ignoble roles in acts of terror, vicious inter and intra cult conflicts that led to destruction of lives and property in the state.

It appealed to the public to continue to collaborate with the police in ensuring that crime was reduced to the barest minimum.

A statement signed by the Force Public Relations Officer, CP Emmanuel Ojukwu, said Mrs Ojukwu made the donation when she visited the IG.

The statement said the machine would strengthen the Interpol Wing of the Force Criminal Intelligence and Investigation Department in capturing data of Nigerians in Diaspora.

It also said the device would ensure that criminally minded Nigerians that were smearing the country’s image were dealt with in accordance with the law. (NAN)