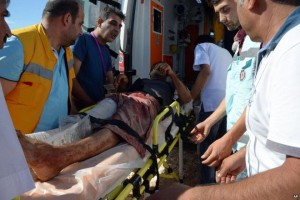 Islamic State (IS) militants have killed more than 120 civilians since launching a fresh attack on the Syrian border town of Kobane, activists say.

According to the BBC, IS “fired at everything that moved” after entering on Thursday, said the Syrian Observatory for Human Rights. A separate IS attack on the north-eastern city of Hassakeh has displaced 60,000 people, the UN says.

Kobane became a symbol of Kurdish resistance in January after an IS siege lasting several months was repelled. IS launched an apparent two-pronged offensive on Thursday after Kurdish fighters from the Popular Protection Units (YPG) cut off one of the militants’ major supply routes near Raqqa.

Raqqa is the de facto capital of the IS “caliphate”, whose creation IS announced a year ago after it captured large swathes of northern and western Iraq and parts of Syria.