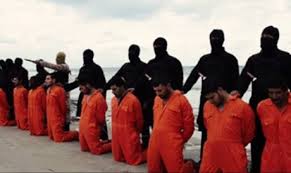 Based on the Christian teaching, INFORMATION NIGERIAN used its platform to seek the opinion of Nigerians as to whether or not it is right/biblical for Christians to launch a counter/revenge attack on ISIS militants for killing Christians.

We’ve put together what Nigerians have to say on this topic; here is what they said:

One reader, Elaigwu Ngbede Justin subtly supported the revenge action by Christians, saying; “Jehovah supported the Israelite against their enemies. We should not watch Islam eliminate Christianity from the world”. In response to this reaction, another reader of INFORMATION NIGERIA said “Mr Christian Fighter, Please in your own interest and God’s sake, don’t avenge for God oooo… its written “Vengeance is mine, says the Lord of Host”. We serve a Living God who can fight his own battles and not some dead gods. The Battle is the Lords and not yours. If he could save the Israelite from the Egyptians without coming down to fight, he’s still alive to do the same ooo. Don’t help God. He’s more than Able”.

In supporting a revenge action against ISIS, another reader, Felix Otuya suggested that at this time biblical principles should be dropped, he said; “I think at this point bible principles should be kept aside. Christians should stand up and defend themselves before they are wiped out by these evil forces”. In supporting what Felix said, another reader said “stop supporting the killing of Christian and say God will fight, is it not somebody God will use to fight for us. Those commenting that it is not good the way Christians are fighting back don’t even know the bible”.

A more direct and frontal reader said “Christians should stop being stupid and start eliminating the Muslim. If you were going out for preachin and you were killed, we know you died for christ but if you were in your home and someone came to kill you and your family and you did nothing then you are stupid. Why God rejected Saul was simple – God told him kill all the Philistines but he disobeyed. and now the philistines are thesame arabs, terrorist and Muslims”.

X’zel Emmanuel, was more conservative in his comment as he said “If they should keep on doing this there is no difference between them and the ISIS group. Christians are meant to face persecution. If our Lord Jesus faced it, who are we not? I tell you something, God still loves those ISIS group because we are still in the time of grace. Remember one of the laws in the ten commandment “Thou shall not kill”. Another reader, Nebechi Okerulu expressed thesame idea as Emmanuel saying “Vengeance is still for God. So for any Christian to do that ,they are just like ISIS”.

Another reader, Uzoegbo Anthony supported revenging as he said “if u see any, kill am before he kills you…those Muslims are animals”. Emeka Kingsley used his comment to appeal to those whose comment would leave all men blind since an eye for an eye is what they are advocating for as he said “It is very wrong, because you can’t fight for God. Now there is no difference between you and them now. You just sin against God, in His sight you are a murderer. Please repent now”

Florence Faleye also appealed saying “Please and pleaseeeeee don’t let the devilsh people push us from God, our God is able to fight the battle and He will fight for us stop this is barbaric”.