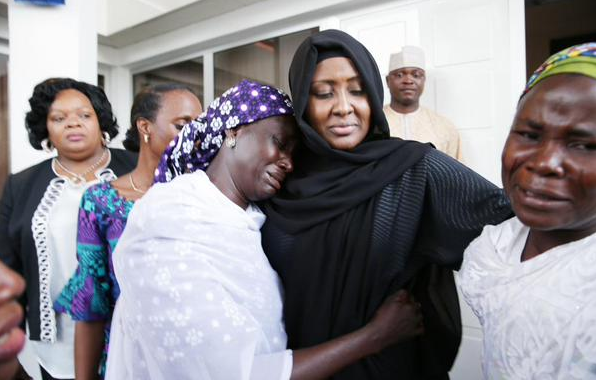 President Muhammadu Buhari, his wife Aisha and wife of the Vice President Mrs Dolapo Osinbajo today met with two of the mothers of the Chibok girls at the Defence House in Abuja.

Mrs. Osinbajo had earlier led the two women to a meeting with Hajia Buhari before another round of meeting with Buhari.

The women wept profusely following the meeting and pictures that emerged from the Defence House showed the president’s wife consoling them with tear-filled eyes.

“Hajia Aisha Buhari had, for many months, wanted to visit Chibok. She also wanted to meet with the mothers,” said Mrs Osinbajo, who also had tears in her eyes as she spoke with State House Correspondents.

“Today, we had an opportunity for them to meet face-to-face. We had two of the mothers who still have their daughters missing after a year. 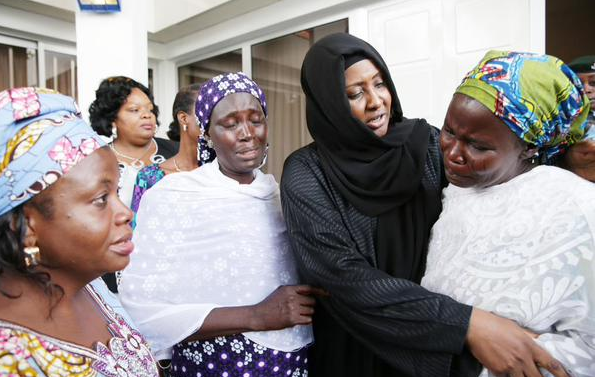 “Hajia, being a mother, met with them, held them and they cried, everybody cried. What only a mother will do is to say ‘wait, I want you to see your father and see what your father will do.’

“We were all extremely overwhelmed that at this time when the President is so busy, he had time to meet with the women from Chibok.

“He spoke to them in English and Hausa. He explained to them how he keeps telling everybody to put themselves in their place.

“So, today, we have had the opportunity for the President and Hajia to show that they are our father and mother, for that we are glad.”

Over 200 girls were on April 14, 2014 abducted from their school by the Boko Haram sect. They are yet to be found.