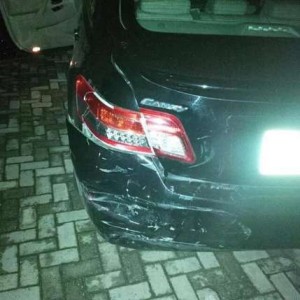 The highly energetic Terry G has reacted to reports that he fled after bashing the rear end of Adeola Suwe’s Toyota Camry car on Friday night, June 5, 2015.

According to Terry, he has no reason to bash anyone’s car and fled or threaten or beat the person up as an accomplished young man with a family.

The singer took to his Instagram account to give what has been regarded as his statement on the allegation that has went viral since Adeola Suwe tweeted about it on Friday night.

In the words of Terry G, ‘Why will I Gabriel oche amanyi, a proud 29 year old father and a devoted Christian hit someone’s car and still want him beaten without fixing it up at this point of my life. so unfair…As for @officiallindaikeji please verify before posting and please the A list blogger that you are girl…#dontmindthem #totori #datshowweroll’.

He also claimed the singer’s aides threatened to beat him up.