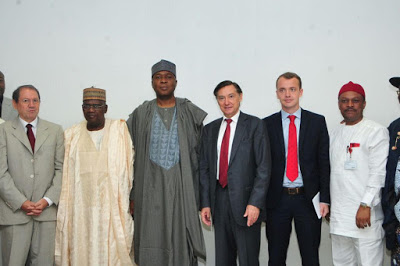 The Senate President, Dr. Bukola Saraki today, Tuesday, gave assurance that there would be no delay in the confirmation of ministerial nominees once the list is sent to the legislature by President Muhammadu Buhari.

The senate president made this known when he received the France Ambassador to Nigeria, Mr. Denys Gaver, who paid him a courtesy visit in his office in Abuja.

According to a statement issued by his media office, Saraki said his continued insistence that the Red Chamber of the National Assembly will resume plenary when there is any urgent matter of national importance, was to ensure that the suspension of plenary does not affect serious government business like the screening of ministers.

Responding to the comments by the French Envoy, the he said that though the Senate is currently on recess “we are working and we are ready to reconvene any time to attend to any national assignment, including the confirmation of President Muhammadu Buhari’s ministerial nominees”.

The statement also quoted him as pledging the cooperation of the National Assembly with the executive arm of government in accomplishing the programmes of the administration.

The Senate President said bills from the executive arm of government would be treated with dispatch, as part of efforts to support President Buhari to effect the positive change expected from his administration by Nigerians.

He also informed the visiting French delegation that the Senate under his leadership has commenced work already with the setting up of the 18 man committee to formulate a realistic and progressive Legislative Agenda, which he said would address issues like poverty alleviation, law enforcement, national security, commercial disputes, eradication of corruption and investments in the Petroleum sector.

Saraki further said the National Assembly will partner with the French National Assembly in the area of capacity building for legislators, strengthening the bilateral relations between the two countries and ensuring that more French investments flow into Nigeria.

He specifically solicited the co-operation of the French government in tackling the security problems in the North-eastern part of Nigeria, particularly as Nigeria shares borders with French-speaking countries.

The French Envoy said that the expectation of the international community on Nigeria is high.

Mr. Gaver also called for partnership between the private sector in Nigeria and its counterpart in France.

On security, the French envoy said his country is encouraging her former colonies in West Africa to co-operate with Nigeria in the onslaught against the Boko Haram insurgency.