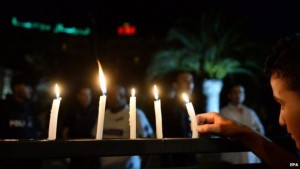 Tributes are being paid to victims of the Tunisia beach attack which left 38 dead, including at least 15 Britons. No British victims have been officially identified but the names of some were confirmed by friends and family. BBC was there:

It comes as the relatives of others still missing since the gun attack near Sousse desperately await any news of their loved ones. More than 1,000 British tourists have returned to the UK, while it is thought 2,500 more could fly home on Sunday.

Meanwhile, Home Secretary Theresa May has chaired a meeting of the government’s emergency Cobra committee. Hundreds of demonstrators gathered close to the scene a day after the attack for a rally against terrorism, with some holding candles and others carrying flags of the UK and Tunisia.

Further details have been emerging about the tourists who lost their lives in the shooting carried out on Friday by gunman Seifeddine Rezgui, 23, who has links with Islamic State. It was described as the most significant terrorist attack on British people since 52 were killed in the 7 July 2005 London bombings.