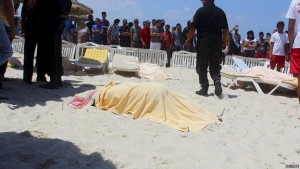 Tunisia’s Prime Minister, Habib Essid has announced a clampdown on security after an attack on a holiday resort in which 38 people were killed. He said army reservists would be deployed to archaeological sites and resorts. About 80 mosques accused of “spreading venom” will close within a week, he said. BBC reports:

Authorities say most of the victims in Friday’s attack near Sousse were Britons. The gunman was shot dead. He was identified as Seifeddine Rezgui, a student not previously known to authorities, officials said. Eight Britons, one Belgian and one German have so far been identified among the dead, the health ministry said. One citizen of the Irish Republic is also confirmed dead.

There were also thought to be Tunisians and French killed in the attack, which was claimed by Islamic State (IS). At least 36 people are injured, some seriously. It was the second major attack on tourists in Tunisia since March, when militants killed 22 people, mainly foreigners, at Bardo museum in Tunis.