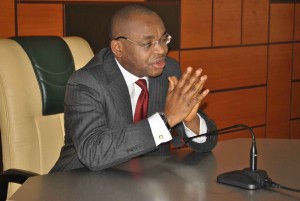 Reports say that they arrived at Obasanjo’s residence at about 2.48 p.m today in company of a former Prelate of the Methodist Church, Nigeria, Dr Sunday Mbang and some other state officials. They immediately went into a closed-door meeting which ended at about 4.05 p.m.

Addressing journalists after the meeting, Udom said he was in Abeokuta to pay homage and to thank Obasanjo. He said he consulted with Obasanjo shortly before the general elections and that his advice paid off.

“I have come to show gratitude and respect for someone whom I regard as a father and whose advice I regard as invaluable and which also contributed to my victory at the polls,” he said.

The governor acknowledges that his predecessor had laid a solid foundation upon which he would build and move the state to greater heights.