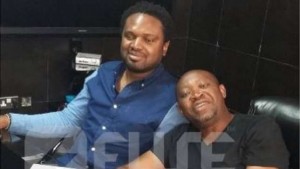 He might be blind but he’s still one of the most talented music producers in the country.

The Award winning music producer, composer and singer Cobhams Asuquo, has just been unveiled as the latest ambassador of MTN.

The gifted musician shared a picture of him signing the endorsement deal alongside Paul Okoye, the CEO of Upfront Bookings today, June 2, 2015.