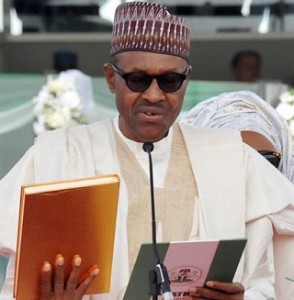 Founder of the All Progressive Grand Alliance (APGA) and the United Progressives Party (UPP), Chief Chekwas Okorie has picked out a flaw in President Muhammadu Buhari’s inaugural speech. He noted that the president failed to mention Dr Michael Okpara as one of Nigeria’s past heroes.

“…let me seize this opportunity to point out the fundamental flaw in the inaugural speech of President Buhari. You can notice I have applauded the speech, but it is not 100 percent.

“When he began to mention Nigeria’s past heroes, he did not mention Dr. Michael Okpara, the former Premier of the Eastern Region.

“In terms of area of influence and the positions these heroes occupied, it amounted to unavoidable mistake that clearly sent very negative signals to have recognised even the likes of Akintola, Mallam Aminu Kano and J. S. Tarka whose political party did not control any region,” Okorie said.

Speaking further, he said: “Another area that left a gap is that no reference was made whatsoever to the prolonged and scandalous neglect of the South-East geopolitical zone by all governments since the end of civil war in 1970.

“There is no gain saying the fact that the three ‘R’ Reconstruction, Rehabilitation and Re-integration promised by the Gen. Gowon government has been observed in the breach. We were full of expectations that a government that is for all would have made even if it is a passing statement to show that in the course of the administration, the special circumstances of the South-East geopolitical zone shall receive the consideration and special dispensation of the president.